Yesterday I was lucky enough to stumble upon the NZ Offshore ‘Thunder on the Harbour’ powerboat race being held at Wellington Harbour. I was even luckier to turn up within minutes of the opening circuit crash between superboat team Fairview and superboat lite team Alimax. Below is a selection of images from the day.

The Fairview team superboat rides over the back of the superboat lite class boat Alimax during the first circuit of Wellington harbour, causing the Alimax boat to roll. 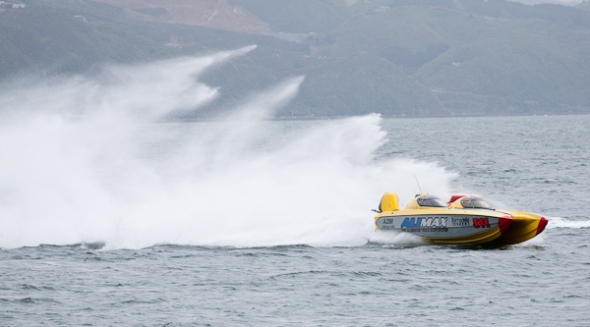 The tap received from the Fairview boat sends the tail of Alimax spinning.

The Alimax boat begins to roll over as its tail end slides across the water.

Alimax rolls over as the superboat Fairview continues the race.

The Fairview superboat is surrounded by spray from another race boat during the NZ Offshore "Thunder on the Harbour" powerboat race at Wellington Harbour.

The superboat lite Red Steel powers across Wellington Harbour during the NZ Offshore "Thunder on the Harbour" powerboat race.

This entry was posted on April 15, 2012 by Antony Kitchener. It was filed under Personal Works and was tagged with NZ Offshore, Photography, Powerboats, Wellington Harbour.