I seem to shoot a lot of film these days (keeps me interested in photography when I’m not able to photograph the subject matter I’m actually interested in), hence all the film landscape shots!

Recently I discovered the Law of Reciprocity the hard way. Reciprocity failure – defined as the non-linear decrease in light sensitivity (speed) of a film at the extremes of very short and very long exposures times. In real terms this means for long exposures a correction factor must be added to the exposure time in order to correctly expose a scene.

I’ve been shooting a series of pictures of Wellington at night using Fuji Velvia 50. For Velvia 50, any exposures longer than 1 second need to have the exposure times corrected to reflect the Law of Reciprocity. So for a marina lit by a full-moon at f8 with a 30 second exposure, would need a correction of 1 stop. Exposures beyond 32 seconds are not recommended. Being a slide film, Velvia only has an exposure latitude of 1/2 stop meaning that if my exposure is off by more than half a stop, you end up with an image that looks very much like this: 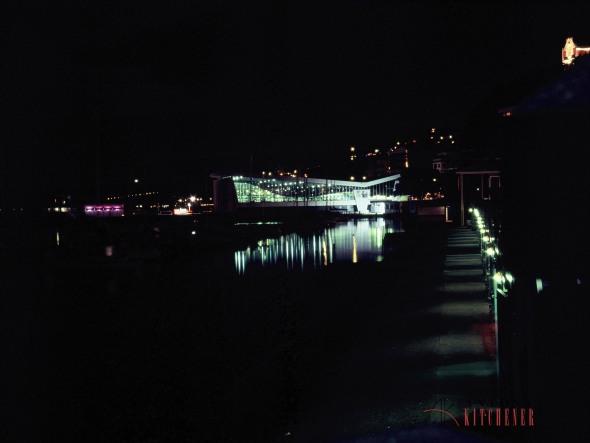 Chaffers Marina, Wellington under a full moon. Velvia 50 (120 roll) with an exposure of around 30-45 seconds

I was so horrified after paying $50 or so for developing two 120-rolls of Fuji Velvia, I switched to Fuji Provia instead. Reciprocity failure occurs with Provia at exposures longer than 128 seconds. My second attempt at producing a moonlit shot of Chaffers Marina looks like this:

I will go back to playing with Velvia now I know what I’m doing!

This entry was posted on August 31, 2015 by Antony Kitchener. It was filed under Personal Works and was tagged with Chaffers Marina, Film, Fuji Provia, Landscapes, New Zealand, Photography, Wellington.